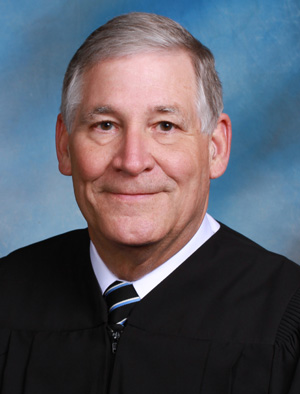 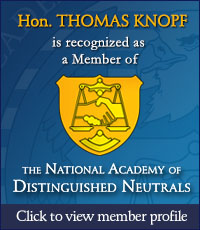 Thomas J. Knopf
Judge Tom Knopf was a judge for over 25 years. He served 12 years as a District Judge and 15 years as a Circuit court judge in Louisville Kentucky. He was Chief Judge of both the Jefferson District and Circuit Courts. He is currently a partner with Retired Judges & Associates Mediation & Arbitration Services. He is listed in the Best Lawyers in America for 2008 in the field of alternative dispute resolution. He has currently been nominated to be included in the Kentucky Super Lawyers magazine.
View Resumé   |  View Available Dates 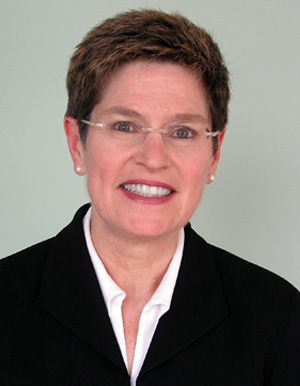 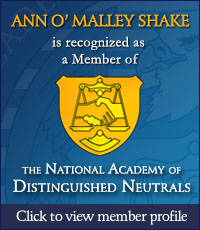 Ann O'Malley Shake
Judge Ann O'Malley Shake began her legal career in 1982. As a lawyer, her practice was primarily business and commercial real estate matters, in addition to an 18 month stint as a prosecutor in drunk driving cases. Elected to the bench in 1990, she presided in every division of district court (including 2 years exclusively in the probate division), she served for 12 years in Circuit Court (general jurisdiction) and concluded her judicial career for the last 18 months as a judge on the Kentucky Court of Appeals. She presided over multiple personal injury, wrongful death, business, real estate and decedent's estate disputes, among others. In years of mediating cases, she has mediated many, many personal injury, wrongful death, business, real estate and decedent's estate disputes and employment law cases which have resulted in settlements. What she enjoys most about mediating is spending (usually) 1 day with a case, and, at the end of the day, witnessing the relief of the parties and their lawyers when a difficult litigation matter is resolved. She has served as arbitrator for many cases, including nursing home claims, real estate matters and business and contract disputes. She will be honored to assist you and your client(s).
View Resumé  |  View Available Dates 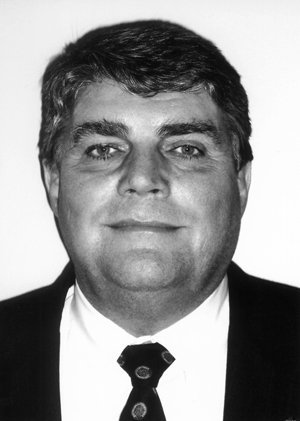 Steve Ryan
Judge Ryan has over thirty years of professional experience and twenty years of Judicial Experience. He has tried a variety of cases from fender benders to multi-million dollars products liability and numerous medical negligence cases. Judge Ryan is a graduate of the National Judicial College Mediation Program and significant experience in mediating cases.
View Resumé 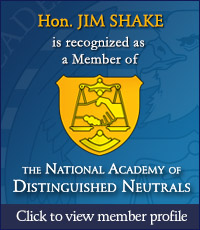 James Shake
Judge James M. Shake served as Jefferson Circuit Court Judge for 24 years beginning March 1993. He was elected to three terms as Chief Circuit Judge in Jefferson County and Chief Regional Judge for the Metro Region, named Judge of the Year in 2003 by the Louisville Bar Association, Distinguished Alumnus by the University of Louisville Louis D. Brandeis School of Law in 2007, and the Henry V. Pennington Outstanding Trial Judge by the Kentucky Justice Association in 2009. He is past President of the Kentucky Circuit Judges Association and a Life Fellow of the Kentucky Bar Foundation. Throughout his career, he has been actively involved in judicial education.
Judge Shake looks forward to offering his services and experience, enabling litigants to resolve disputes that might otherwise go before the Court or a jury.
View Resumé


Barry Willett
Judge Barry Willett represented the citizens of Jefferson County as a distinguished Circuit Court Judge for 22 years before retiring on July 1, 2021. A native of Louisville, he graduated from Seneca High School, the University of Kentucky and the University of Louisville Brandeis School of Law. Before being elected to the Circuit Court bench, Barry was a respected trial attorney. The early years of Barry’s private practice were as a shareholder with the respected Louisville business litigation law firm Greenebaum Boone (“little Greenebaum”). During these formative years, Barry had the opportunity to defend national and international corporations in a variety of negligence and business litigation cases. He earned an “AV” peer-reviewed rating (highest rating awarded) from Martindale-Hubbell. In the early 90’s, Barry began to focus his practice on civil litigation representing individuals injured by the negligence of others. He handled plaintiff’s professional negligence, product liability, premises liability, wrongful death and automobile negligence cases. He was elected to serve as president of the Kentucky Justice Association (then named Kentucky Academy of Trial Attorneys) in 1997. He was appointed to serve as a Special Justice on the Kentucky Supreme Court in 1998. Judge Willett served three terms as Circuit Court judge from 2000-2021. He was elected by his fellow judges as the Chief Judge of the Jefferson Circuit Court for 2010-2011. Kentucky Chief Justice John D. Minton, Jr. appointed him the Chief Regional Judge for the Metro Region for 2010-2011. The Kentucky Justice Association honored Judge Willett with its Henry V. Pennington Trial Judge of the Year Award in 2017. As a circuit judge, Judge Willett presided over a consolidated group of thousands of claims pertaining to medical device-Medtronic In-Fuse litigation. Judge Willett completed a certification level civil mediation training course at the Duke University Private Adjudication Center in 1995. Judge Willett recently attended a comprehensive civil mediation training course offered by the American Arbitration Association (Mediator Essentials: Skills for Negotiating Facilitated Agreements, August 20-23, 2019, New York, NY). Judge Willett recently authored a chapter on Mediation and Arbitration for Kentucky Trial Court Judges published in the 2021 Circuit Judges bench book distributed to circuit judges throughout Kentucky.
View Resumé